Adam and I had a great day at the beach on Sunday. Such a gorgeous New England day! I took a few photos with my phone and for the millionth time I thought to myself, argh I really would like a REAL camera. I started looking online and then became overwhelmed with all of the choices.

So, I am asking for some recommendations for a good beginner digital camera. It doesn't have to be anything too fancy because frankly I don't currently know how to do much more than point and click. If you can't recommend a specific camera, is there a brand that I should focus on? And what should I be looking for in a camera? And I guess price isn't really a huge issue, I've waited this long to get one, so if I should wait a little longer and save up for something that would be worth it in the long run I'm good with that. I really appreciate any guidance.
Posted by amy at 7:03 PM 4 comments:

As I was sweating it out on the elliptical this morning, I glanced over at the computer and watched picture after picture flash through the save screen from our wedding day. I saw the faces of friends and family and us and it made me smile. As our two year wedding anniversary fast approaches (7/23), I am reminded of how lucky I am to have a husband that I love deeply and a support system of wonderful people to lean on when I may have a day now and then that I want to tag out.

Today is a beautiful day in New Hampshire, high seventies/low eighties for a high, low humidity after a several day stretch of air so thick you could cut it with a knife. So today Adam and I are going to head out and recreate our first date...We'll go to the beach and go for a long walk and I'll remember that day when this crazy white water kayaker kid told me that he couldn't let me walk on the beach without holding my hand and I gave him my first eye roll and of course let him take my hand.

It ain't always easy but I think that's what makes it so beautiful. And so worth it. 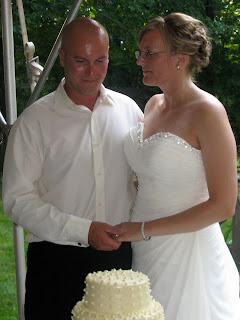 Apologies for the lapse in posts. I was at horse shows for a lot of May and June and then I had the pleasure of being in a friend's wedding. In all of the hustle and bustle, I didn't carve out the time to sit down and write.

If I had to sum up horse show season thus far, I would have to say it's a mixed bag. We have had some good classes, we have had some not good classes. I did go home home with a blue ribbon from one show, but in thinking back to all of the rides so far this season, I would not count that one as my best. Our best class that I think we've had so far, we got third place, which was a good ribbon in a class of nice horses. We were on our game and it felt super satisfying exiting the ring with that yellow ribbon. I was proud of my horse for working so hard and we really worked as a team. That was a good one.

There have been times this season that I have questioned if this show world is really for me and I don't think I've really answered that for myself yet. I think maybe I will scale back and stick to the local shows and just have fun, rather than putting the pressure on myself (which no doubt my horse feels when I'm riding) and showing out of New England.  Not sure what I'm going to do, I guess that's a to be continued. For now, I don't have any plans to show next. I'm sure I will later in the season, but not for the next little while.

I'll leave you with a picture of our victory pass at a show in NH... 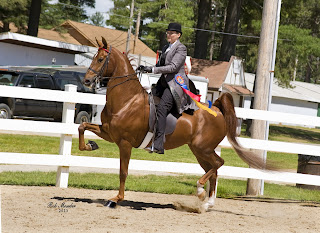 Mario & I made our television debut last week on our local station. You'll see our mugs about halfway through the segment. Enjoy!
Posted by amy at 8:48 PM 1 comment: 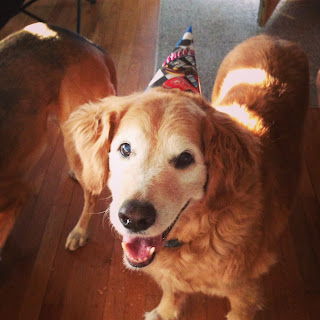 If you know me, like, at all, you know how important Kobe is to me. Kobe is my recently turned 13 year old Golden Retriever/Newfoundland mix. Kobe came into my life when I was fresh out of college back in 2000. I was working at a prep school in central New Hampshire. I was in a meeting and one of the facilities guys on campus came into the room to fix something. We stopped the meeting, said hello and he told us that his dog had just given birth to a litter of puppies. What kind? I casually asked...

The next week I found myself driving to his house to pick out my future mister. In no shape or form was I in any position to have a puppy. None. I barely had two cents to rub together, I was living with my mother and grandmother with no apartment prospects on the horizon...I was pretty much a hot mess. I went back weekly to watch him grow up until that day that he could come home with me. I will never forget that day several weeks after our first meeting.

I had mentioned to my mom that these puppies were born and she reminded me that acquiring a puppy would not be the wisest thing to do. In not so subtle terms, I'm pretty sure she said no. A lot. Every time I talked about the puppies. But it was done. This guy had gotten into my heart and he wasn't leaving. So, off I went to pick him up. He and I made the hour ride to the house, him on my lap, me realizing that I had probably made a really dumb decision. One that I was at peace with.

I scooped him up and into the house we went. Well, like me, thankfully both my mother and grandmother are suckers for a cute face. The anger and disappointment in my irresponsible decision quickly subsided and we found ourselves on the front lawn discussing potential names for this not so little bundle of fur. And so began our journey, one that that I am so thankful is still ongoing.

That dog has been a loyal friend in a world where few exist. On Sunday, April 28th he turned 13. He's been and continues to be so much to me...My walking companion, my shadow, my protector, my constant. He's always there, whenever I need him. Now that he has reached "senior" status, he relies on me to help keep him comfortable. And he is. He is a happy senior, living a good life. Yes, he's slowed down some...But let's face it, Kobe was never really fast anyway.

I decided that entering your teen years as a big dog is a pretty big milestone, so we had a little birthday party for him this past weekend. I baked a doggie cake. Yes, yes, I did. A couple of his closest friends came over and they ate cake, treats, and played. I think he had a good time... 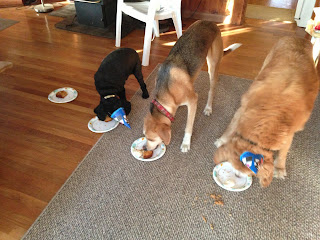 "This class is going to be crazy!" 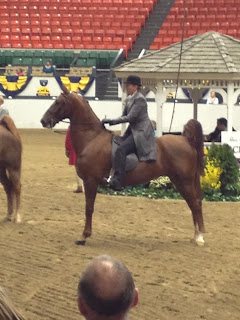 We had a successful first horse show of the season! No, we didn't bring home a blue ribbon but we did bring home two ribbons from both our qualifier and our championship classes. We found a division that suits Mario, and had clean rides in both classes - no big mistakes! That being said, we did learn some things to help us improve as the season progresses.

The Park division is so much fun! It's a faster pace, and you can really ask your horse to step up and give it his all. Something that I didn't like about showing in Country Pleasure last year was that I really had to hold Mario back. This year, I have to push him! We had a lot of horses blowing by us, so I need to work on just letting him go. I'm really used to applying pressure to the reins at the canter to get him to slow down, but I need to ease up and just let that boy run. I learned that at this show.

Mario and I warmed up in a different ring than our competitors in our Championship class. When we came to the warm up ring where everyone else was before going into our class, there were two horses that were out of freaking control. "This class is going to be crazy!" I heard a guy say. He was right. One of those two horses nearly collided with Mario and me when we were cantering second direction of the ring in our class. I had to make a quick decision to steer Mario to the right to avoid crashing. Unfortunately the judge did not see this near collision and when I veered right, I came a little closer than I would have liked to the judge. It may have hurt us, it may not have - who knows.

I have to say though, something that my uncle Gary said to me really rang true as I reflected over the last couple of days about the show, "If you're having fun, the ribbon doesn't matter." So true. This horse show was the first time that I truly had so much darn fun that the ribbon didn't matter. My horse is so safe and I completely trust him. He listens to me in the ring. As I was watching some of these other horses I realized that he may not be THE best of the best show horses (I mean, he's pretty darn close) but he's also not going to hurt me. Some of those horses I watched this weekend made my pulse race and not in the good way! I'll take a horse that may take third/fourth/fifth over a horse that will win every time if I know I'm going to have fun and not fear for my life.

Our next show will be Bonnie Blue in Lexington, VA in a couple of weeks. I believe it may be webcast and will for sure let you know the information if I'm right about this. 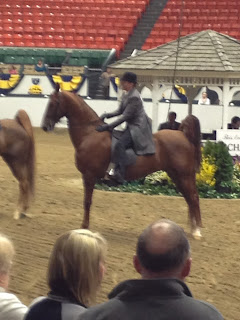 Ok showing tonight. http://arabianhorseglobal.com/hsg-live-events/ in class #39 three gaited park horse amateur - starts at 7 my class will prob be like 7:30.
Posted by amy at 2:47 PM 1 comment:

Older Posts Home
Subscribe to: Posts (Atom)
the wisdom's in the trees, not the glass windows - j.j. 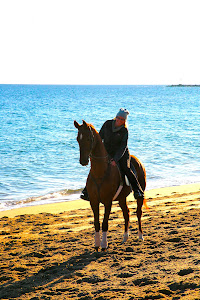 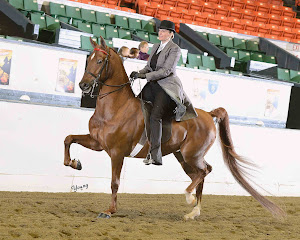